One of the first mothers to give birth at home using a new maternity service has praised the midwives who supported her.

Diane and Simon Jeacock were thrilled baby William was born at their home, near King’s Lynn, thanks to the Midwife Led Pathway, which was launched by the Queen Elizabeth Hospital.

The couple say midwives Sarah Roberts, Lisa Barham and Natasha Blackmore were “wonderful” for their support before and after the birth.

Mrs Jeacock said: “It meant a lot to be able to give birth in our home. The midwives were kind, caring and professional. They fitted in with what we wanted to happen, which made a big difference.

“As I was more relaxed, so was my husband and from the moment he was born William has been a contented baby.”

Mrs Jeacock had opted for a less clinical approach to the birth of her second child after delivering the couple’s daughter Harriet, aged three, in hospital.

She said: “As I am fit and healthy, I didn’t feel the need to be in hospital. For me it was important for the birth to be in my own environment which put me at ease and led to a straight forward delivery.”

Mrs Jeacock went into labour on the evening of January 28 and made contact with midwife Lisa Banham at around 8pm. 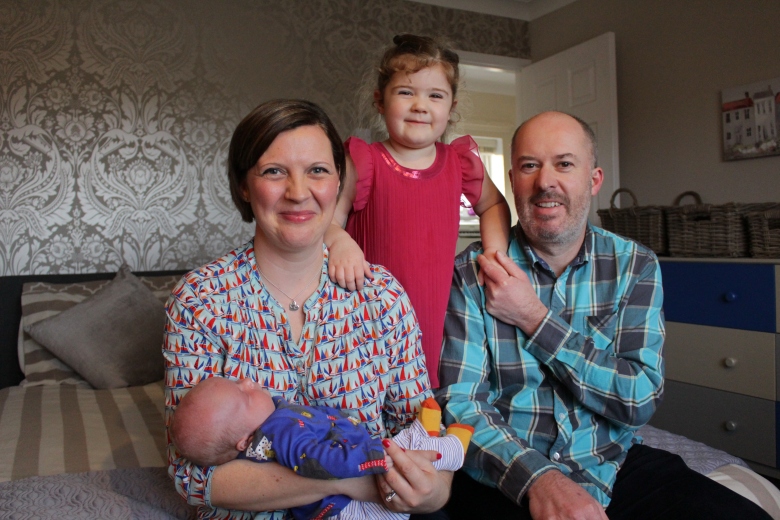 She said: “Lisa came out to check me over, and she immediately put me at ease.

“She was positive and encouraging. The important thing was for me to be relaxed at home and able to have a bath and rest as much as possible.  Lisa gave me the choice of her staying or coming back later. We decided that I would ring her when things progressed.”

She called again at 2am when Lisa was joined by Sarah and Natasha, who is a student, to help with the final stages.

Mrs Jeacock said: “They were lovely and fitted in with what I was comfortable with. I didn’t want the labour to slow down so I kept moving.  I think it helped to speed up the process as I was mobile. Even though I was moving from room to room the midwife team ensured I was monitored and supported throughout.”

An examination at around 5am showed things were really starting to progress and Mrs Jeacock made the decision to give birth in her bedroom.

She said: “I had relaxing music playing and because I was comfortable, I needed less pain relief. I just had a bit of gas and air towards the end when I needed to push.

“The midwives were outstanding, and I felt very spoilt to be cared by them. They knew the best places to rub my back to relieve the pressure during the final stages of labour. They also made it easier for my husband and he felt he could relax knowing I was in capable hands.

“The midwives did laugh as I was so excited that I was finally going to meet my son.  I was elated that it happened at home.”

After William was born, weighing 7lb 8.5oz, Mr and Mrs Jeacock relaxed and enjoyed a cuddle with their new son while the midwives cleared up and also brought them tea and toast.

Mrs Jeacock said: “The type of experience you have when you give birth is something you remember for your life time and having a positive experience with a home birth made this more personal and special.

“I would definitely recommend this service to anyone who is interested as this is a first class service and encourage other expecting mums to consider if this could work for them to discuss with their community midwife.”

Mrs Jeacock gave birth during the pilot ahead of the official launch of the pathway, which allows women to give birth either at home or in the Midwife Led Waterlily Birth Centre.

A team of 43 midwives is able to offer support to for women in West Norfolk and Fenland along with up to Boston in Lincolnshire and Brandon in Suffolk.

Director of Nursing Emma Hardwick said: “The Midwife Led Pathway has been a long term vision of the Trust and we are excited to be able to offer this service to women in Norfolk, Lincolnshire, Cambridgeshire and Suffolk.

“Supporting women in their choice of place of birth is very important because we know that having a positive birth experience has the long term benefits for the health of the women and her family.

“Mrs Jeacock’s story shows that we have achieved our aim of placing an emphasis on the woman and her needs while continuing to provide high quality and safe care.

Pictured are: Diane and Simon Jeacock with daughter Harriet and new son William