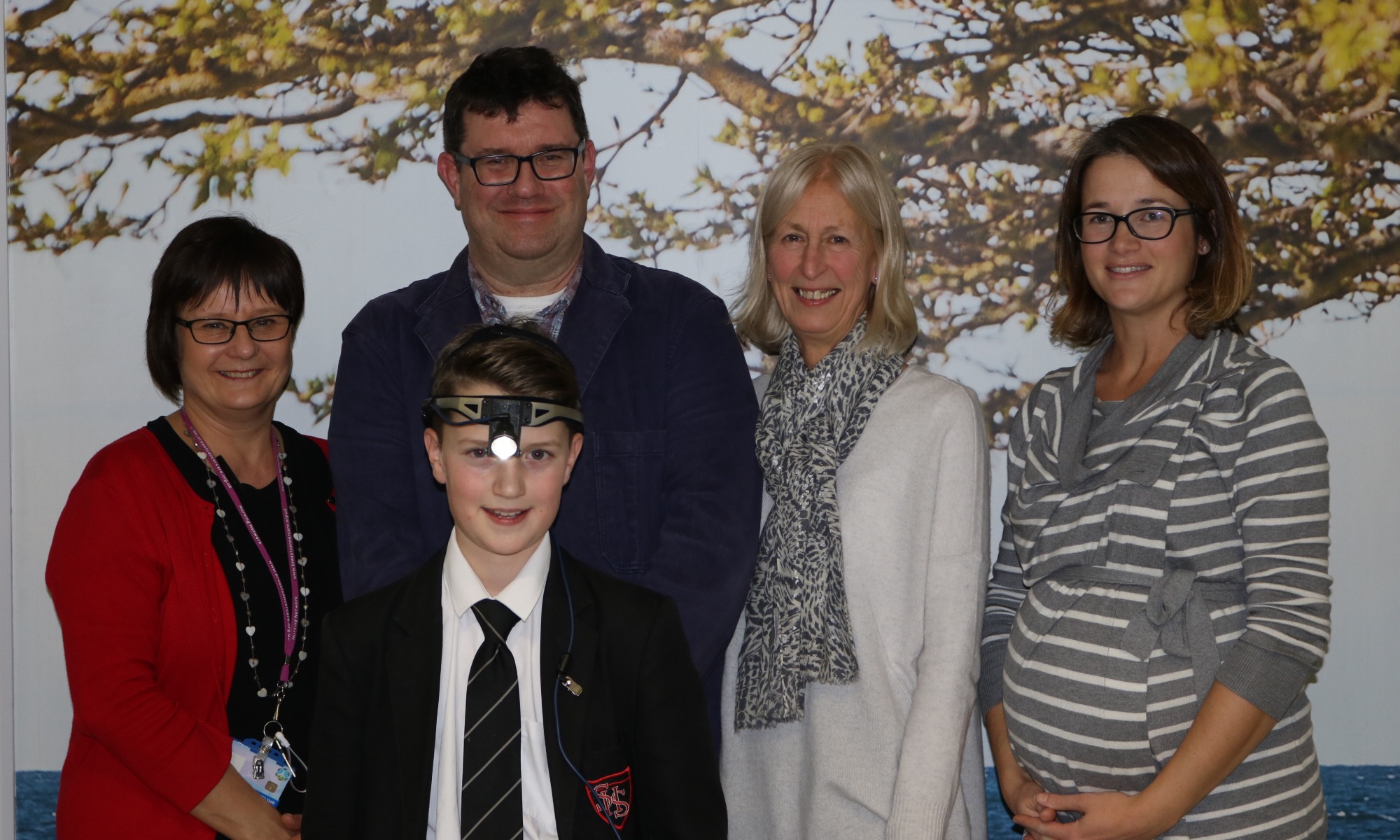 The memory of a pioneering surgeon who saved the lives of countless people in West Norfolk has been honoured.

Sadly Mr Hudson passed away on 23rd May, 2017, aged 81 but will be continuing to help patients as donations from his funeral service have funded a specialist surgical headlight to help the Trust’s Breast surgeons.

His wife Sally, his son William and grandson Freddie were invited into the West Norfolk Breast Cancer Unit to look at the light. Mr Hudson is also survived by his eldest son Jonathan and grandchildren Caitlin, Erin and Ella along with step children Ben, Ellie, Dominic and Charlotte.

Mrs Hudson said: “Mike was well-known and much loved so we felt it was important for the money to go towards something special for the Unit and its patients.

“As a surgeon, Mike will be fondly remembered for fiddling with the overhead lights in theatre so he would think this specialist Head Torch is a great idea.

“He enjoyed being part of the Trust and working with its staff and patients. Years after he retired, Mike would still be recognised by his patients for the difference he made to their lives.”

Mr Hudson was lucky to survive because shortly after his birth on 21st March, 1936, he was given an emergency blessing by a priest, when he was struck down with pneumonia. Medicine ran in the family as his father, Ernest, was a Consultant gynaecologist and obstetrician and his mother, Mary, was a nurse in London.

He battled against a number of early childhood illnesses and this may have given him an innate kindness and ability to sympahtise. He attend Keble Prep School, Highgate Junior School and the Senior School in Fargate House.

In 1953, Mr Hudson attended St Bartholomew’s and went onto work at the Royal Masonic, the Royal Berkshire and the North Middlesex Hospitals.

Mr Hudson was keen to undertake research and achieved a USA Fulbright Scholarship in 1973. He ran a Breast Screening Unit at Kansas Medical Centre as part of a trial in 18 states to assess the effectiveness of screening. In 1974, Mr Hudson also went onto co-write a paper on “Early Cancer Detection” and another on “Carcinoma of the Male Breast”.

Returning from America, Mr Hudson applied for a consultant post in East Anglia as he always wanted to be a country surgeon. He was appointed in 1975 to work with Graham Thompson and Paul Seargeant as a General Consultant and Specialist Vascular Surgeon for King’s Lynn and North Cambridgeshire Hospitals.

Mr Hudson would make a special effort each Christmas lunch to cheer up the patients by coming into the Hospital to carve the turkey while dressed as Father Christmas or Tony the Tiger.

Having retained his interest in breast surgery, Mr Hudson pioneered the creation of a multi-disciplinary team at the QEH in around 1990 when the national screening programme started.

In 1992 Mr Hudson reduced his work commitments after suffering a small coronary and finally retired in 1999.

Miss Burger said: “We are incredibly grateful to Mike’s family for the donation which has allowed us to buy this light.

“The light has made a big difference to intricate surgery, particularly reconstructive operations, as the powerful beam follows the line of my eyesight.

“Mike played an important role in the creation of the West Norfolk Breast Unit and it is fitting that it is a surgical device has been purchased in his memory.”

Mr Mike Hudson is pictured in the second photograph