Terminally ill patients and their families will be able to find peace in a new garden which has been created in memory of a popular King’s Lynn man.

Alan Rasberry, 52, who lost his short battle to pancreatic cancer on June 19, 2013, has been honoured with a garden, which aims to help patients and families going through a similar ordeal.

The beach-themed Alan Rasberry Peace and Hope Garden has been created near Shouldham ward.

This stunning garden, complete with a boat and benches, was funded with a £10,000 donation made by Mr Rasberry’s family and friends.  Over the last three years they have raised more than £20,000, with donations directly to the Pancreatic Cancer Charity also.

Mr Rasberry’s wife Lindsey is pleased with the garden, which reflects the West Norfolk scenery.

She said: “I am hoping that it will help to give peace and tranquility to those who have just received the worst news of their life. You need somewhere quiet to go to sit and reflect on what you have been told.

“I think the garden is wonderful and I think Alan would also be pleased with it. We loved going to the beach and it is nice to see that reflected in the garden. He will always be remembered.”

Alan worked for 20 years at Lloyds TSB and was a well-known in Norfolk and Cambridgeshire. He also played football, Rugby and Golf for various teams in the area.

Mrs Rasberry, stepdaughter Lucy Massen and nephew Gavin Caney along with other relatives and friends have joined in the fundraising efforts. 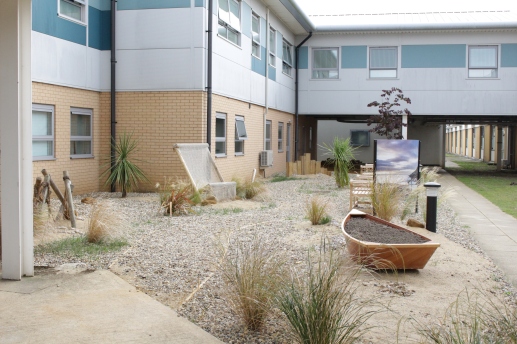 Local journalist Mr Caney completed a 52-mile triathlon, with his twin sister Kelly King joining in the 14.7 mile run element. Other fundraisers include a party, race night, charity auction and the support of the WOW (Wine on Wednesdays Ladies Group).

The creation of the garden has also been supported by Country Grounds Maintenance Ltd (CGM), of Downham Market, along with East Coast Signs.

Chief Executive Dorothy Hosein also hopes that the garden will make a difference to patients.

She said: “I would like to thank Mr Rasberry’s family for raising more than £20,000 during an extremely difficult time. Not only will the garden be a lasting memorial for Mr Rasberry but will also help other families who are going through a similar situation. This is just one of the projects being undertaken around the hospital to improve the experience for our patients.”