Young patients were given a direct line to the North Pole to pass on their Christmas wishes onto the man himself.

Children, who are being treated on the Rudham Ward at the Queen Elizabeth Hospital, ensured they are on the ‘Good List’ during a live video call with Father Christmas on Tuesday, December 6.

Thanks to video communications technology from Cisco, several youngsters and their parents enjoyed a virtual visit as part of the Connected Santa programme, which is helping to bring cheer to hospitals across the country.

Among the youngsters taking part was two-year-old Noah Bunn. 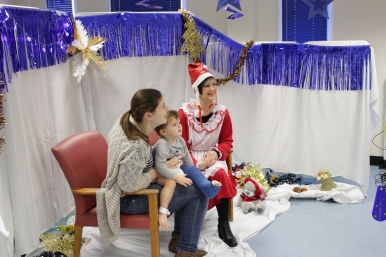 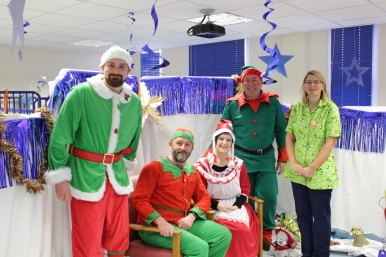 Noah ended up in hospital after falling over a dinosaur and breaking his leg but the youngster’s morning was brightened up by a chat with Santa.

His mum Elizabeth, of Ashill, said: “It was lovely and a really nice thing to do. Noah enjoyed speaking with Santa and it has added a bit of festive cheer.”

A room in the hospital was transformed into a grotto and manned by a team of elves, who were on hand to greet the young patients along with handing out toys.

Jonathan Wade, the Trust’s Director of Strategy and IT Services, said: “Being in hospital at this time of year is particularly hard for youngsters but this call with Father Christmas really made a difference.

“I would like to thank our partners at Cisco for making this possible and bringing some festive fun to the children and their parents.”

Cisco Uk and Ireland Chief Executive Scot Gardener said: “For many children, visiting Santa, and telling him what they want for Christmas is one of the most exciting parts of the holiday season.

“But for those in hospital this tradition can often be missed. We’re delighted to be able to utilise the power of our digital technology and work with the team on Rudham Ward through our Connected Santa Programme.

“Helping to bring that Christmas joy to the ward and put smiles on the faces of the children, their family and friends.”

The National Elf Service in action! Pictured are, from left, Simon Dart, Rhodri Griffiths, Bonnie Ellis aka Mrs Claus, Gary Luttman and Kelly Hodgson, who is a Health Play Specialist at the Hospital.