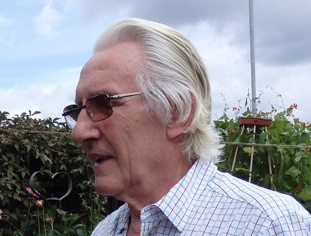 A King’s Lynn senior citizen is brushing off a series of devastatingly bad news for his family to raise money for The West Norfolk Breast Care Unit.

Terminally-ill Jim Evans (78) has grown his hair much longer than normal in readiness for a fundraising short cut by Gould Barbers at Tesco’s Hardwick store on Friday, September 7.

Four years ago Jim and wife Ruby’s daughter Zoe Carter (43) was diagnosed with breast cancer. She underwent treatment at QEH and was given the all-clear last year.

However, just a couple of months later Ruby (83) received the news that she too was suffering from the disease.

Mr Evans said: “We thought we were out of the woods with Zoe and then Ruby went for a check-up and finds that she has breast cancer too.”

And in a further devastating blow to the family, Mr Evans has recently discovered that he has the lung condition asbestosis and his condition is inoperable.

“I’m not too bothered about myself,” said selfless Mr Evans, a retired specialist mechanical engineer. “But it was the final straw and I decided I wanted to do this fundraiser. The hospital did an absolutely brilliant job with both Zoe and Ruby.

“Ruby had the operation and it was as we were waiting for news of the radiotherapy course to follow that I found out I’ve got asbestosis.

“But this is not about me, I’m doing this to support the breast care unit and show our appreciation for what they did for Zoe and Ruby.”

Ruby is currently undergoing daily radiotherapy at The Norfolk and Norwich Hospital and she is accompanied each day by Mr Evans and Mrs Carter.

Mr Evans said: “It helps that Zoe has been through all this before because she can help my wife through it. Ruby says having Zoe and I on either side of her stops her running away!”

Mr Evans also suffers from serious back pain – he broke his back and neck when he was 14 while practising for a gymnastics display.

In preparation for next week’s fundraiser, he has grown his hair to the length of 250mm in some places and admits it is “driving me crazy”. The daily trips to Norwich have hampered his fundraising efforts but he wants to raise as much as possible for the Breast Cancer Unit Development fund.

A sponsorship form is in Holland and Barrett’s shop in Norfolk Street, King’s Lynn, and donations can also be left at Gould Barbers’ shop at Tesco’s Hardwick store.

Photo caption: Jim Evans’ longer hair is driving him “crazy” – but it will be cut short on Friday, September 7 in a fundraiser for The West Norfolk Breast Care Unit at QEH.